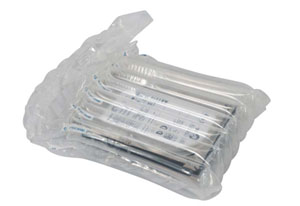 Airsac inflatable packaging is an amazing product. Through clever engineering it actually uses 98% air and only 2% of film to protect your goods.

While 2% of film doesn’t sound like a lot, the film used to produce Airsac has been intelligently developed to provide a rigid but protective packaging that keeps the air safely inside. So, how is Airsac made?

Airsac is made from 80% Linear Low Density Polyethylene (LLDP) mixed with 20% Polyamide (or nylon as it’s more commonly known!) to provide rigidity. All of the LLDP film is manufactured through a process of co-extrusion, like many polythene products. The LLDPE is then laminated with the nylon to create the film used to manufacture Airsac packaging! Laminated films have similar properties to films that are cast, such as:

The nylon part of our film is what keeps the air inside Airsac and ensures it “bounces back” if dropped or mishandled in transit – keeping your goods safe! If you pre-inflate your Airsacs, it’s completely normal for some air to escape the packaging over a 6 – 9 month period, making the packaging appear softer than usual. Don’t worry – you can simply top up the air and use Airsac as normal! See how Airsac works by watching the below video.

All products like Airsac are manufactured in the same way, but we use film from Amcor, one of the world’s leading plastics manufacturers, to ensure our products are of the highest quality.

To view the full range of Airsac inflatable products, head to www.airsacshop.co.uk today. Alternatively, call Network Packaging on 01902 496666 or email sales@airsac.co.uk for a quote and free samples.

An innovative inflatable packaging system for fragile and breakable goods, Airsac is 98% air and 100% recyclable.

Delivering your brand to your customers